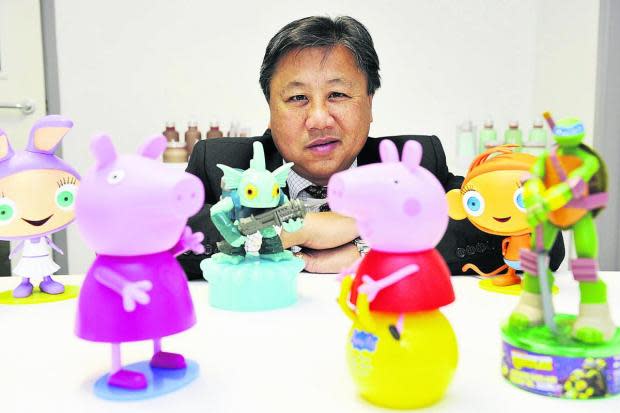 THE FINANCE boss of a company making Peppa Pig bubble baths and other novelty children’s products has scammed the bank out of £628,000 – to hide his mismanagement of the business.

Bruce Cox, a former British Army lieutenant-colonel who, while a serving officer, regularly helped organize the stewards at the Wimbledon Lawn Tennis tournament, got the job with Abingdon-based Kokomo in 2011 after a long career in the armed forces.

Oxford Crown Court heard the company, which manufactures children’s themed toiletries under license, had reached an agreement with HSBC under which the bank advanced 80% of bills in advance. The remaining fifth – less bank charges – would be paid when the customer pays their bill.

In 2018, Cox, 62, allegedly “mismanaged” the company’s affairs. The company had too much stock in the warehouse, with 18 months of its products in the warehouse when it should have only had three or four months.

“It appears that Mr. Cox tried to hide his incompetence by taking money from HSBC to float the business during this period,” said prosecutor James Bruce.

“He admitted to his fellow directors that he had produced one or two false invoices to HSBC but he expressed to his fellow directors that he hoped to get away with it because there had been an audit, it hadn’t not been discovered and HSBC could, it hoped, be reimbursed by the trustees or credit insurance before they realized that their payments of 80% of those bills had been discovered.

The administrators were asked to stop taking money from the company and they organized a clearance sale.

Mr Bruce noted that a character reference described Cox as being able to “maneuver in any environment”.

“Well, he did just that. He persuaded the other members of his team who worked for him that documents needed to be added and modified before [being] sent – so that his fraud would not be discovered.

“He persuaded Mr. and Mrs. Little [the company owners] that he would talk to the bank and work things out, when in fact he delayed talking to the bank and had no intention of doing so.

The total figure put on the fraud was £628,558, although none of this money went to Cox personally.

When the bank discovered the CFO’s fake invoices, the consequences for Kokomo were significant.

Initial bill payments were halted, their credit ratings damaged and Mr and Mrs Little were forced to ‘step down’ as directors on the condition that HSBC continue to work with the business.

The aftermath of the fraud was estimated to have ‘put the business in excess of £2million in debt’, Mr Bruce said.

Cox, of Idmiston, Salisbury, pleaded guilty at an earlier hearing to fraud by abuse of position. He had no previous convictions.

Mitigating Jonathan Underhill said his client served eight operational tours – including Iraq and Kosovo – while in the military.

READ MORE: Van driver accused of turning around on the A34

He was a man of “exemplary” character and among his credentials was that of retired general Sir James Everard, who appeared in court via the video link on Friday.

“Like [Mr Cox] said, it is a catastrophic error in judgment and decision-making, which will affect him for the rest of his life,” his lawyer said.

Jailing him for three years and four months, Judge Michael Gledhill QC told Cox: ‘The effect of your actions on Kokomo Ltd has been horrendous. He almost went to the wall. The effect on Mr. and Mrs. Little and the other directors involved, again, was very significant.

To receive updates straight to your inbox, sign up for our newsletter here