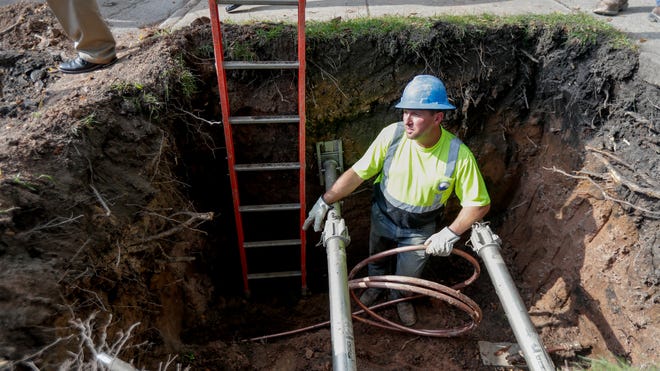 GREEN BAY – The Green Bay Water Department pulled its last lead pipe in the city on Tuesday, closing a chapter in a multi-year effort to improve water quality for residents.

Officials announced the milestone at a press conference on Tuesday before removing a lead service line on the east side and replacing it with copper pipe. This marked the 1,782nd utility-owned line replaced since January 2016, when the utility accelerated lead phase-out amid the Flint, Michigan water crisis.

Green Bay last installed lead pipes in 1944 and began replacing them in 1990, when the city had 4,400. In 2011, the water utility found that the levels in some homes were exceeding. limits set by the United States Environmental Protection Agency and identified 1,782 company-owned service lines and 247 private service lines that needed to be replaced.

Lead poisoning can cause brain damage and lead to learning disabilities, developmental delays, or reduced attention span, according to the state Department of Health Services. Children are the most vulnerable to these health risks.

Quirk said the utility has removed all but one private lead pipe. The last line goes through a house awaiting foreclosure and will be replaced once it is owned by the bank.

The utility spent more than $ 6 million to replace the city’s remaining lead service lines, in part thanks to two rate increases over the five-year period. The initiative also benefited from the Lambeau Field Tax Credit and loans from the state’s Department of Natural Resources. Homeowners with lead lines were not required to pay for a replacement.

Quirk believed it was important to completely remove the source of the lead instead of using chemical treatment, which she said could increase phosphorus levels in the Fox River. The utility also flushes the system to keep the water clean and will monitor copper levels to make sure the new pipes are not causing any problems.

One injured in car crash on Bay Street in Springfield – WWLP