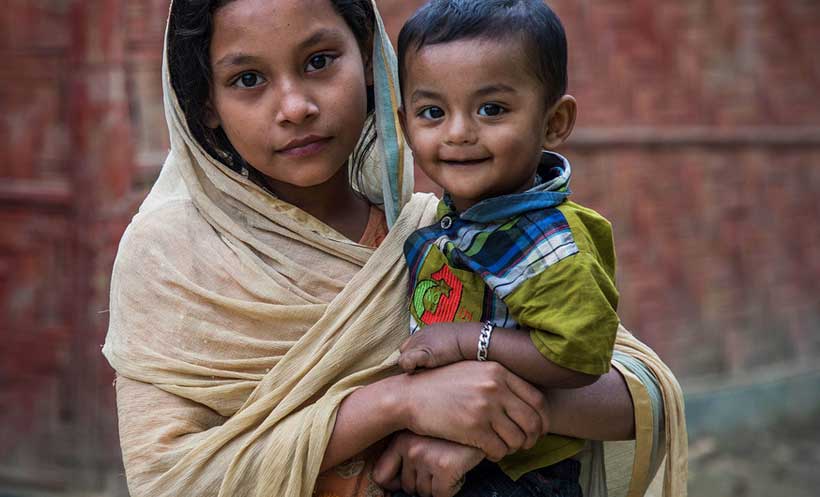 Refugees find themselves in a situation of uncertainty due to the protracted refugee scenario. They are neither eligible for repatriation nor qualified as citizens of the host country or of a third country. However, they have to face the harsh reality of the nature of flawed policies due to the complexity of state systems and the institutional weaknesses of international institutions.

According to UNHCR (2004), long-staying refugees are trapped in an impenetrable and prolonged state of limbo. Although they are not in danger or threatened, they seriously lack access to basic rights, financial assistance and support for their psychological and social needs. As they are pushed towards outside help, they feel unable to escape the core of enforced dependency.

For this emerging South Asian nation in 2017, the flow of this deluge was nothing new. These migrants have entered Bangladesh since the 1970s after being forcibly uprooted by the military dictatorship.

According to a survey, there were around 0.25 million refugees in Bangladesh throughout the 1990s. Around 0.02 million people were returned after the 2000s, but the SPDC (State Peace and Development Council) and the inability of the Bangladeshi government to resolve their differences made this process difficult to complete.

The most persecuted minority in the world, who are clearly stateless and have strong evidence of persecution and genocide due to their race, ethnicity and religion, are currently being cared for by Bangladesh. The responses from international organizations like the UN and its branches like ICJ and IOM are not positive enough for Bangladesh in this regard to produce a permanent solution.

The West African country Gambia filed a 35-page application with the International Court of Justice (ICJ) in November 2019 against Myanmar. The extraordinary victory of the ICJ in the Gambia v. Myanmar regarding the ethnic cleansing and genocide of the Rohingya is the first of its kind. This was based on an “erga omnes” premise, which periodically reports on the situation of the Rohingyas.

However, Bangladesh continues to push international organizations to carry out humanitarian action through the UN. While this concern may have caught their attention and prompted them to consider securing human rights for these forcibly displaced people, it has instead placed a heavy burden on Bangladesh.

Tom Andrews, the UN special rapporteur on Myanmar, issued a warning to international bodies about the Rohingya crisis just days ago during his visit to Bangladesh in December 2021. Bangladesh “cannot and must not shoulder this duty alone,” he said, urging foreign groups to express grave concern. He went on to say that Myanmar, not Bangladesh, was where the conflict originated and where it will ultimately be resolved.

Bangladesh, a developing country with a population of 160 million, is horribly affected by the Rohingya people in terms of social, economic and political spheres. The Rohingya have been in a state of uncertainty since at least 2017, now more than five years ago.

They have been relocated, assisted and secured by Bangladesh and several international organizations, but they still yearn for a lasting solution.

Bangladesh has taken every measure imaginable to bring the Rohingya refugees home. Since the influx of refugees in 2017, the Bangladeshi government has worked with various international groups to promote peaceful voluntary repatriation; however, Myanmar’s military junta has consistently resisted these efforts. Rohingya minority refugees are currently suffering greatly from the political unrest in Myanmar.

While the Cox’s Bazar refugee camps are already overflowing with 1.1 million Rohingya refugees, Bangladesh is moving them to Bhasan Char to provide them with better living conditions.

International organizations had doubts about the safety and security of the island; however, Bangladesh eventually persuaded them to cooperate. Bangladesh had no choice but to relocate some Rohingya refugees to Bhasan Char. Bangladesh now faces a security danger due to overcrowded camps. The Rohingya camps in Bangladesh are home to many terrorist rebel organizations and armies. The Arakan Rohingya Salvation Army (ARSA) is one of them. Despite the problems, Bangladesh continued to push for bilateral talks while applying international pressure on the junta.

Myanmar, on the other hand, is a lawless state that disobeys international law and order. Arrangements for the peaceful return of Rohingya refugees have broken down.

In Myanmar, the regime has become increasingly hostile since the military coup. Myanmar is totally reluctant to help Rohingya refugees develop a strong desire to return. There is no “supranational” authority in anarchy, which is advantageous for Myanmar. Now is the time for the international community to recognize that the Rohingya refugee crisis has become a regional security issue.

Myanmar-related news points to a new genocide. rebel and protest groups in the country are violently repressed by the military junta.

Myanmar military continues to purchase new weapons from China and Russia, including SU-30SME multirole heavy fighter, YAK-130 advanced light attack jet trainer, K-8W advanced trainer and the Ming-class attack submarine, among others, despite an arms embargo. The global community fears that these weapons will accidentally attack defenseless populations. A peaceful voluntary return will face new obstacles due to the internal unrest in Myanmar.

The Rohingya catastrophe, which forced 1.1 million people from their country of birth due to state-sponsored persecution, was of an easily comprehensible scale. When the state commits the crime, the environment becomes more hostile. The main duty of the state is to defend the rights and interests of its citizens.

Refugees are currently skeptical of the military junta in Myanmar. They have a long and painful history of persecuting people. Therefore, persuading refugees to return home voluntarily will not be easy. Myanmar should reach out in a mutually beneficial way. More talks between international parties, including the Rohingya, will build trust and facilitate a peaceful voluntary return of Rohingya refugees. Humanity and peace must ultimately triumph over all other factors.

British politicians are sounding the alarm over Chinese CCTV providers

Next Big Thing of the Financial Crime and Fraud Management Solutions Market: Major…