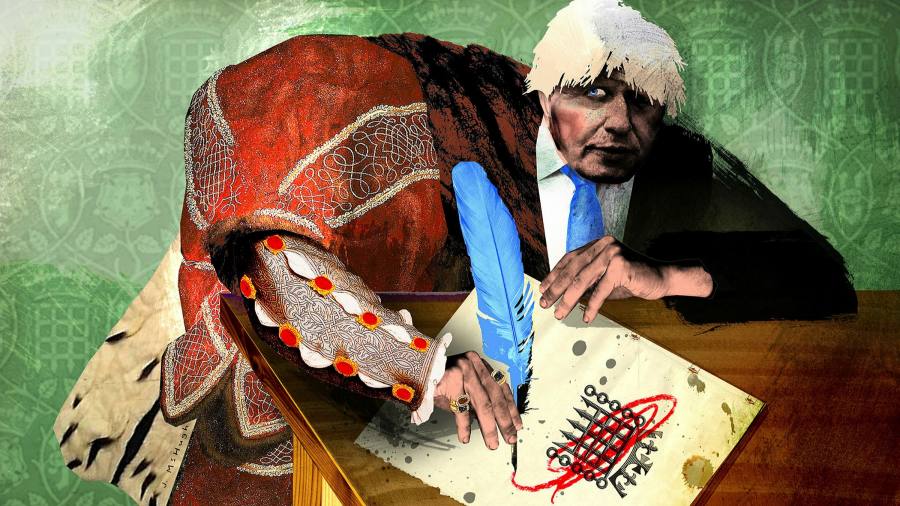 What is freedom these days? Nineteen Conservative MPs voted against reintroducing the compulsory mask wearing in shops and on trains, with one calling it “oppressive and authoritarian”. Oddly enough, neither he nor any of his colleagues voted against the Police, Crime, Sentencing and Courts Bill, a monstrous jumble of laws that would not look out of place in Russia. Soviet – and that was before the government put more clauses through the back door.

Whatever you think of ministers instructing us to wear masks at Tesco, that doesn’t seem like restricting peaceful protests and increasing penalties. If John Stuart Mill was an MP today, he might have felt more attached to him. But even opposition activists worried about the police bill miss the deepest point – that the new despotism may lie in bypassing parliament.

Last week Home Secretary Priti Patel added 18 pages to the bill that were not there when MPs voted on it in July. One provision would prevent protesters from blocking major transport routes: a fair response to the Isulate Britain campaign. But another would extend the power of the police to arrest and search people “without suspicion”. And another would bar appointees from demonstrating if they had previously committed “protest offenses.” It sounds Orwellian. This is in addition to the provisions of the original bill that dangerously border on the criminalization of peaceful protests. The Minister of the Interior wants the police to be able to arrest, impose a fine and imprison any demonstrator if his demonstration is loud enough to cause “serious discomfort” to passers-by. Who defines “serious discomfort”? Lawyers say it is one of the most vague and imprecise languages ​​they have ever seen.

After Bristol Police were accused of being brutally against activists who were protesting, with supreme irony, against the bill, an investigation found they had “failed to understand their legal obligations to protest”. They will not have to worry if the bill passes, because their legal duty, as I read it, will be to crack down on anyone who does not like the Home Secretary. Today’s Home Secretary seems to hate climate change protesters. Tomorrow may hate you, dear reader.

If you think my reaction is hysterical, let me explain how my concerns began, around the time of the lockdown, when ministers regularly renewed coronavirus restrictions without reference to Parliament. I have supported drastic action to protect life and preserve the NHS. But I was also concerned about the lack of debate on the impact on mental health or the economy, and the fact that MPs were prevented from holding the government to account. The problem wasn’t the coronavirus law, which had a two-year expiration date, it was an “emergency procedure” in the public health law that gave ministers the power to make rules simply by declaring the matter “urgent”, without consulting anyone or providing evidence.

It turns out that this public health power has been used no less than 91 times in the past 20 months. And that’s not the only “urgent” power in the Law Book, according to the Hansard Society. Whitehall increasingly turns to obscure procedures to rush into policies that may individually seem trivial, but which together constitute an attack on democracy by granting sweeping powers to the executive.

Two new reports warn that we are moving towards “government by diktat” as power moves away from parliament. Bills are often drafted only in broad outline, with important details left to secondary legislation which cannot be amended and can become law with little or no scrutiny by parliament. The “powers of Henry VIII” allow ministers to repeal or change laws with little oversight. And now, according to a House of Lords committee, Whitehall is using guidelines and protocols as a form of “backdoor legislation” – with legal effect but without oversight.

These trends precede Covid-19 and Brexit. In 2008, for example, the UK’s climate change target was raised from 80% to 100% greenhouse gas reductions through secondary legislation and after just 90 minutes of debate. – which does not seem appropriate for a decision with such serious financial constraints. consequences. More recently, the government’s decision to require caregivers to be vaccinated was the first time in English law that a person’s vaccination status against Covid-19 explicitly affected their eligibility to work. Still, it was rushed under delegated authority, with just 90 minutes of review. In 2015, George Osborne’s attempt to reduce tax credits using delegated powers was rejected by the Lords, but for only the fifth time in half a century.

Some will wonder why can an elected government not do what it wants? The answer is yes, but in the light of day. Most regulatory texts apply to obscure sounding questions that are shrouded in technical language. Politicians rarely look too deep: they’re just grateful to be told by officials that they won’t have to come back to parliament. If in a hurry, departments use the age-old argument that they won’t use powers much anyway. When a Minister of the Interior assured deputies that “the police [will] attaching conditions to only a small proportion of protests ”, it sounded like a scene from the TV series Yes Minister.

It is surprising that a Conservative government produces huge volumes of laws that expand state power. It is appalling that he is so flippant about democratic freedoms. But it is truly amazing that he doesn’t seem to be wondering how others could use the powers he is creating.