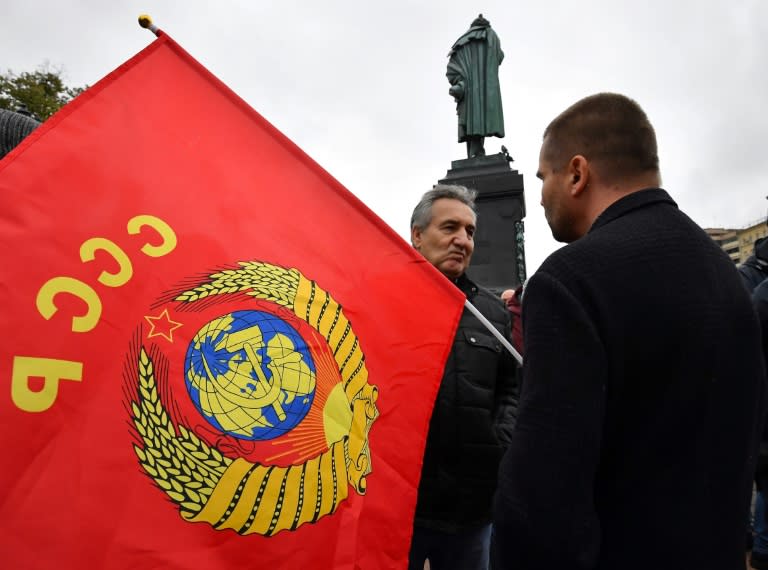 The Russian Communist Party on Saturday led a demonstration of a thousand people in central Moscow against what it called “colossal” fraud in parliamentary polls as police arrested a number of activists.

It was the first major protest in Moscow since the controversial polls this month, and police did not interrupt the unauthorized rally but played loud music in an attempt to drown the protesters.

Before and during the demonstration, the authorities detained a number of activists, including Sergei Udaltsov, leader of a radical socialist group, Left Front, according to OVD-Info, which monitors detentions during opposition rallies.

At his residence outside Moscow, President Vladimir Putin hailed the ruling party’s “convincing victory” and said Russian democracy was strengthened as he welcomed the leaders of five parties that won parliamentary seats , including Communist leader Gennady Zyuganov.

Opponents of Putin have accused authorities of mass fraud after the results showed the deeply unpopular ruling United Russia party won a large majority in parliament in parliamentary elections.

The three-day vote came following a historic crackdown on the opposition, with authorities jailing Putin’s most vocal critic, Alexei Navalny, and officially banning his organizations.

Thirty years after the collapse of the Soviet Union, many Russians in Moscow and elsewhere supported the Communists as a form of protest voting, some for the first time.

More than a thousand protesters gathered in Pushkin Square on Saturday as Communist figures denounced what they called a stolen election, an AFP correspondent said.

The crowd chanted “Putin is a thief!” and called for the release of political prisoners.

Some protesters carried signs demanding a recount, others expressed support for Navalny.

Some protesters at the rally said they did not support communism as a political ideology, but still showed up at the protest to express their anger at the electoral fraud.

“Everyone is here and we all supported the Communist Party during the elections.

Members of the Communist Party were particularly critical of the results of electronic voting in Moscow, which reversed strong advances by Communist Party candidates in the September 17-19 vote.

“There was colossal election fraud in Moscow,” Rashkin said, adding that the party would challenge the election results.

“I don’t believe the online vote was fair because you don’t know who voted for whom it’s impossible to control,” said the 29-year-old.

Some of Navalny’s senior associates praised the rally, with Lyubov Sobol calling them “cool” on Twitter.

On Monday, the Communist Party held a small protest that saw a few hundred people gather in Moscow. The police subsequently arrested a number of party members and activists.

Addressing party leaders on Saturday, Putin stressed that for the first time since 1999, the lower house of parliament would have five factions instead of four, hailing it as a sign of “democratic development in our country.”

How Black and Hispanic Millennials Look Outside the 401k for Investing