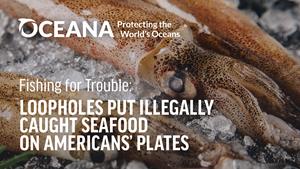 US demand for seafood drives illegal fishing around the

Washington, 01 Feb. 2022 (GLOBE NEWSWIRE) — Today Oceana comes out a new report showing that the illegal seafood trade, fueled in part by US demand, is harming local fishing communities around the world. Oceana says this demonstrates the need to expand traceability and transparency requirements for all seafood imports. Imported seafood is not covered by the US Seafood Import Monitoring Program (SIMP), which requires catch documentation and traceability requirements for certain imports. Currently, the program only applies to 13 species and species groups threatened by illegal, unreported and unregulated (IUU) fishing and seafood fraud.

The United States imported an estimated $2.4 billion worth of IUU seafood in 2019 alone. The high demand for seafood in the United States, combined with the limitations of SIMP , allows seafood from illegal activities to flood the US market, causing economic and ecological losses around the world. In the report, Oceana highlights four examples of seafood entering the United States that is not covered by SIMP and potentially stemming from the illegal seafood trade, which threatens fishing communities and puts jeopardize the health of the oceans. Oceana calls on President Biden to expand SIMP to include all imported seafood and implement net-to-plate traceability.

“When Americans order calamari from a restaurant, they don’t want an element of criminal activity to come with it,” said Beth Lowell, Oceana’s acting vice president for the United States. “The reality is that imported seafood on American plates can come from illegal fishing, crime, environmental destruction and human rights abuses. Seafood that is fraudulently labeled or harvested illegally, unreported, or unregulated has no place in the United States. President Biden should ensure that all seafood sold in the United States is safe, legally caught, responsibly sourced, and honestly labeled by expanding seafood traceability and transparency at sea. the origin of the seafood we import, the government can more effectively screen imports and keep illicit products away from the U.S. market – and support legal fishers around the world.

The SIMP was created in 2016 to combat IUU fishing and seafood fraud among seafood imports, but the program only requires documentation and traceability of catches for 13 types of seafood products. imported seafood, or about 40% of US seafood imports. In addition, the program only requires traceability from the boat or farm to the US border, not to the consumer’s plate. In 2019, Oceana published the results of a seafood fraud investigation, testing popular seafood not covered by the SIMP, and found that one in five fish tested nationwide was mislabeled, demonstrating that seafood fraud is still pervasive in the United States. Seafood fraud and IUU fishing ultimately harm honest fishers and seafood companies that play by the rules, hide the conservation and health risks of certain species, and mislead consumers who are victimized of a bait and a change.

Oceana’s report highlights examples of species slipping through the SIMP cracks from areas where IUU fishing is pushing fisheries and communities towards collapse. These examples include:

“President Biden has an opportunity to lead the global fight against IUU fishing, while protecting our oceans and the coastal fishing communities that depend on them,” Lowell said. “The Our Ocean conference in April provides a platform for the United States to engage in stronger actions to combat IUU fishing, including expanding the seafood import monitoring program to all seafood. sea, increasing the transparency of commercial fishing vessels and taking stronger action against countries that fail. to combat IUU fishing and forced labor in their fleets.

In the United States, up to 85% of the fish we eat is imported. A report by the International Trade Commission found that the United States imported $2.4 billion worth of seafood from illegal, unreported, and unregulated (IUU) fishing in 2019. IUU fishing can include fishing without permission, ignoring catch limits, operating in closed areas, targeting protected wildlife and fishing with prohibited gear. These illegal activities can destroy important habitats, severely deplete fish populations and threaten global food security. For illegal fishers, IUU fishing is a low-risk, high-reward activity, especially on the high seas where a fragmented legal framework and lack of effective enforcement allow it to thrive.

In January 2021, Oceana published the results of a national survey finding that Americans overwhelmingly support policies to end illegal fishing and seafood fraud. Among key findings, 89% of voters agree that imported seafood should be held to the same standards as seafood sea ​​fish caught in the United States. Additionally, 81% of voters say they support policies that prevent the sale of seafood in the United States that has been caught using human trafficking and slave labor. Eighty-three percent of voters agree that all seafood should be traceable from fishing vessel to plate, and 77% support requirements for all fishing vessels to be publicly traceable. The results show widespread bipartisan support for policies aimed at increasing seafood transparency and traceability.

To read the report, visit: http://oceana.org/ExpandSIMP.

To learn more about Oceana’s campaign to expand seafood traceability and transparency at sea, visit usa.oceana.org/StopIllegalFishing.

Oceana is the largest international advocacy organization dedicated solely to ocean conservation. Oceana is rebuilding abundant, biodiverse oceans by winning science-based policies in countries that control a third of the world’s wild fish catch. With more than 225 victories that have ended overfishing, habitat destruction, pollution, and the slaughter of endangered species like turtles and sharks, Oceana’s campaigns are delivering results. A restored ocean means one billion people can enjoy a healthy seafood meal, every day, forever. Together we can save the oceans and help feed the world. Visit www.USA.Oceana.org to learn more.